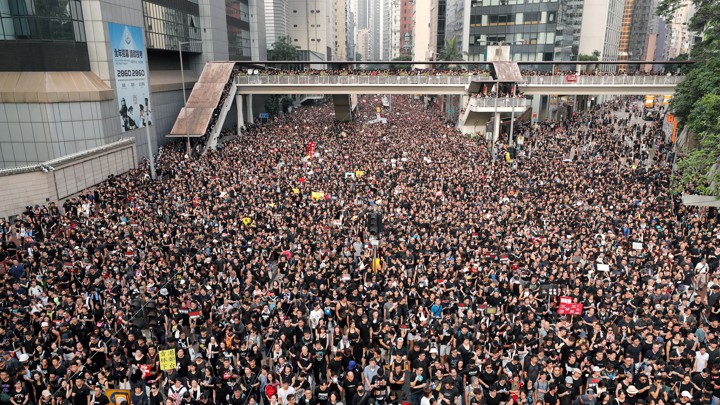 The people of Hong Kong have been fighting for many years to hold China to the commitments Beijing voluntary made in 1984 allowing Hong Kong a “high degree of autonomy,” and guaranteeing that democracy, rule of law, and basic human rights would be respected under the “one country, two systems” model. These commitments were then reiterated in the 1990 Basic Law. In 2007, Beijing announced it would let the people of Hong Kong elect their own leader directly by 2017.

Not only have these commitments been unrealized, most have been rolled back significantly as the space for democratic input by the people of Hong Kong has shrunk. In 2014, Beijing rejected the possibility of democratic elections to select Hong Kong’s leader. Following the peaceful and respectful protests that followed, reformist politicians elected to the Legislative Council were not allowed to take their positions and student leaders were prosecuted, imprisoned, and forcibly exiled. Then Hong Kong residents (and foreign citizens) advocating for free expression were kidnapped by Chinese secret police and illegally imprisoned in China in flagrant violation of the Basic Law, international law, and accepted human rights principles.

I am certainly against all violence committed by anyone. There is no doubt a small number of mistakes have been made by a few of the more radical protesters, but this pales in comparison to the violence meted out by the Hong Kong police which is itself is much less that will happen if the Chinese paramilitary forces massing on the Shenzhen border should cross into Hong Kong.

Nevertheless, I have tremendous sympathy for what these massive numbers of Hong Kong people are struggling to achieve. If the people of Hong Kong don’t fight to hold Beijing accountable to China’s own commitments, what chance will they have of maintaining their most basic rights now and in the future? We only have to look at the tragic experience of the Tibetans, who were also once promised significant autonomy by Beijing, to see what is at stake for the protesters.

To support the people of Hong Kong, the principles of human rights and democracy, and our common aspirations for a free, open, and democratic Asia-Pacific region and world, we must all stand with the brave protesters in Hong Kong and condemn all violence committed in this crisis by anyone.

China’s leaders should also, by the way, consider this approach. Rather than fighting so hard to make Hong Kong more like China, the rulers in Beijing would be well served to recognize that a China more like Hong Kong – with greater rule of law, stronger institutions, and more empowered citizens – would be far more able to unlock the almost unlimited potential of the Chinese people.