Questions about the October 2019 Military World Games in Wuhan 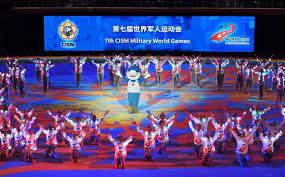 Questions about the October 2019 Military World Games in Wuhan

Earlier today, a Canadian military officer who had heard my interview on pandemic origins with Lex Fridman, contacted me through my website, telling me he had participated in the October 2019 World Military Games in Wuhan, where he and many other athletes had gotten extremely sick.

The 2019 Military World Games were held in Wuhan, China from October 18-27, 2019. For those not familiar with these games, militaries from around the world send teams to compete (more here) in what is designed to foster mutual understanding and bridge-building.

The Canadian officer and I jumped on a Zoom call this morning, when we spoke for 45 minutes. I found him extremely credible and impressive. Although he believes it’s extremely likely he was infected with the SARS-CoV-2 virus while in Wuhan, he was never given a serology test, even after raising the possibility of infection in Wuhan with his superiors.

His goal in reaching out to me was to raise the profile of his concerns while protecting his identity as a serving officer. For this reason, he agreed for me to post this information on my blog. The goal of this blog post is to raise fundamental questions and to encourage a deeper process of interviewing, testing, and analyzing any frozen blood samples taken from Military World Games athletes who fell ill during or following the Wuhan 2019 games.

Should it be the case that Chinese authorities knowingly put the health and well-being of international athletes at risk in October 2019, that would inevitably raise major questions regarding international participation in the February 2022 Beijing Olympics.

It is certainly concerning that so many military athletes became ill during the Military World Games. Although members of the US Congress and others have called for a deeper investigation of this issue, it is unfortunate this has not yet happened in any systematic and meaningful way. This is certainly something that the World Health Organization’s Scientific Advisory Group on the Origins of Novel Pathogens (SAGO) should pursue.

We should also be doing everything possible to secure access to blood samples from the MWG games athletes who fell ill as well as the stored blood samples of Wuhan residents during the second half of 2019. As is by now well known, the Chinese government has prevented all access to these critical samples in the context of its massive coverup and extensive efforts to block any meaningful investigation of pandemic origins.

Our governments can and should also be doing far more. The letter from the Canadian Surgeon General is a case in point. The January 2020 letter rests on an unfounded belief that the SARS-CoV-2 virus had not begun circulating in Wuhan in October 2019. This is by no means a settled issue. Lots of phylogenetic data suggests that the outbreak likely began in October or November of 2019 (some even say September), so it’s not at all impossible that the MWG athletes could have been infected. One study even suggests a link between these athletes coming home from Wuhan and initial outbreaks in their home countries.

Although we cannot yet say for sure whether the Military World Games Athletes were infected with the SARS-CoV-2 virus when competing in Wuhan in October 2020, and there’s a very real possibility this was not the case, this issue at very least deserves further examination within the context of a full and credible investigation of pandemic origins.

That’s why all roads lead to the same conclusion: Everyone on earth is a stakeholder in ensuring — and must demand – a comprehensive investigation into pandemic origins in China with full access to all relevant records, samples, and personnel.

Rather than rewarding Beijing with another opportunity for a propaganda spectacle when the Beijing Winter Olympics open in February, we should be demanding full transparency and accountability as an absolute precondition for international diplomatic participation.

Following the publication of this post, the Canadian officer sent me an email on December 16, 2021 describing his experiences in some additional detail. With his permission, the body of that message in included below:

This was my 6th World Military Games event. Wuhan was like nothing I’d seen before. The money and energy thrown at it was something to behold. Propaganda par excellence. But the feeling in Wuhan was eery. It really hit at the opening ceremonies when our assigned standard-bearer (holding the placard in front of our flag bearer) wept, and I mean sobbed, while maintaining the biggest shit-eating “picture perfect” smile on her face. Gotta look good for Xi. I can only imagine what goes on in Xinjiang.
Wuhan itself felt like a cordon sanitaire. That’s the only way I can put it. I had a similar experience when on operations before. It’s a weird time when you have to reference everything you say for fear of being canceled and painted as a conspiracy theorist. Wuhan life…
As the saying goes, we’re a product of our experiences, and since my teens, the military has trained me to work and think in a certain manner. The military doesn’t attract the brightest, so it beats into our heads how it wants us to think. As both an operational planner and tactical operator, we’re trained to think in terms of risks and probabilities– most likely vs most dangerous. This is basics. What completely baffles me is there seems to be no open discussion of the balance of probabilities/risk assessment for the origins of the virus and the follow-on decisions, or lack thereof, carried out by the PRC. My most probable/likely base case, founded on my experience on the ground in Wuhan, early reports, the nature of the regime, and the research conducted there, points heavily towards a lab leak with an extensive coverup to save face. Most dangerous, though less likely — but which should be open to discussion — is that this was intentional and planned. The peripheral tin-foil-hat theories should be dealt with openly on the principle that sunlight is the best medicine for both virus and mis-dis/information. In my eyes, the “wet-market bat-pangolin” story is equal to “Fort Detrick” or “Event 201” being responsible. All of this should be dealt with openly, ref: https://www.centerforhealthsecurity.org/event201/scenario.html; http://www.xinhuanet.com/english/2021-08/04/c_1310107970.htm.
Add all this to the response by my government et al, and it’s incompetence at best and malevolence at worst in either completely ignoring or suppressing an evidence-based assessment of what went on. I noticed a couple of comments to your article and just laughed. I don’t think the average citizen can appreciate what it’s like to work in a bureaucracy like the military. You’ve worked in government so I know you get it– it’s a cluster-fuck 90% of the time. Countless numbers of us all tried to get tested, report to our respective base medical officers, etc, etc, and we were all roundly fucked-off. And I’m one of the crustier ones. Just think that most of the contingents are made up of very junior privates and corporals. Imagine what kind of chance they have bringing this forward. And it’s not like the Generals or Diplomats who were in attendance are going to do anything. They know who they are and not one of them is willing to step into this geo-strategic lion’s den and political swamp– then they’d have to do something.
This isn’t going away. The virus is still here. People are still dying, economies are in tatters, freedom of movement is still restricted, balance sheets have blown-out to historic levels, and now the PRC and their partners think it’s a ripe time to make their ascent to power? History will look back on those trying to deflect and appease as they have on similar types in the past. Quislings, the lot of them. We press on.
_______________________________________________________________________
(Posted January 11, 2022)
After posting this blog, I received additional messages from other athletes who competed in the 2019 Wuhan Military World Games. Some of these messages were from athletes with a different perspective on what they believe occurred in Wuhan. Because my goal is to turn over every stone — and not to prove any particular hypothesis — I will add these types of messages as I receive them (with the permission of the authors).
e-mail received 1/10/22:

I am an active serving member of the CAF and was a Canadian athlete at the 2019 World Military Games in Wuhan, China.

Life: Coming to a Screen Near You