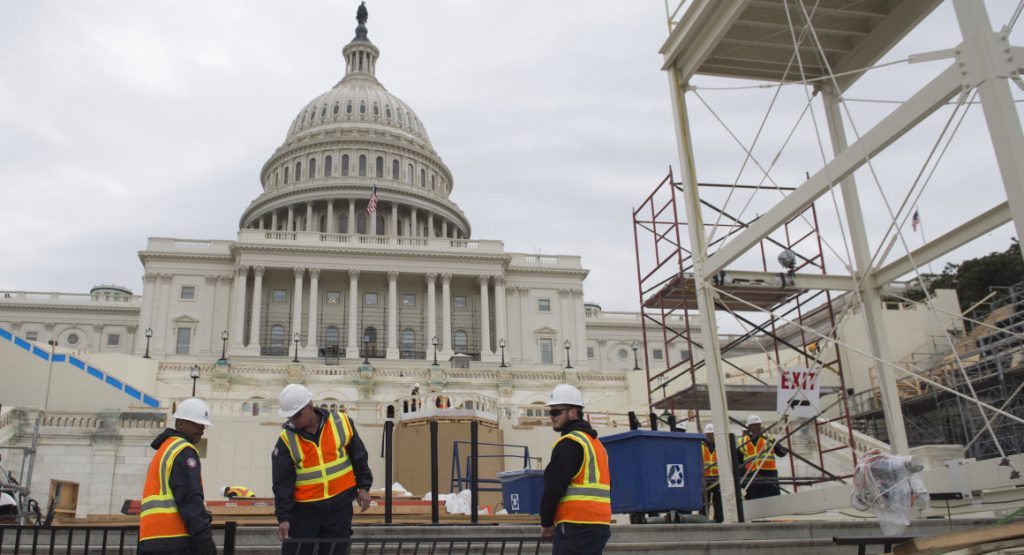 The day before the inauguration of Donald Trump as President of the United States, the level of anxiety and uncertainty among the majority of Americans is dangerously high.

Whatever critiques any Americans may have had of President Obama, even his sharpest critics would agree that he brought a tremendous dignity and respect to the office of the presidency. Whatever hopes some may have for the incoming Trump presidency, the opposite appears to be the case. It’s an American political tradition—and just smart politics—for the person elected President to start reaching out after the election to the voters who did not support him. In the more than two months since November, Donald Trump has done the opposite. The incessant tirade of Twitter attacks and peevishness has pulled at the fabric of the nation. The incoming president has the lowest approval rating of any incoming president since the advent of public opinion polling. Worse, the expected coming torrent of allegations, leaks, and releases of a wide range of scandalous information threatens to turn the presidency into an ongoing, and distracting, circus.

America has always been an idea buttressed by institutions. The institutions of democracy feel solid, but they are, in fact, figments of our collective imagination. Strong democracies don’t need policemen on every corner, as dictatorships do, because our citizens have internalized the policemen of our mutual obligations. By saying it’s smart to not pay taxes, however, Trump has shifted this idea of democratic government. If the role of citizens is to evade the government, as Trump implies, we will wind up like Greece. If a leader with authoritarian instincts claims that he is channeling the will of the people, as Trump has done, and disregards the norms and institutions of governance, we could wind up like Venezuela and Argentina. If we put our hopes in the professional military to maintain our constitutional traditions, we could be following the dangerous model of Ataturk’s Turkey. If we trust Vladimir Putin and Julian Assange more that our collective intelligence services, we will undermine our security and empower our adversaries.

Over the past months, President-elect Trump has criticized and antagonized Angela Merkel, the NATO alliance, America’s allies like Japan and Korea, Mexico, the Mexican people, etc. He has bizarrely gone out of his way to antagonize China, the second most important country in the world today, and inexplicably court Russia. Trump advisor Kellyanne Conway has repeatedly said that Trump “says what he means and means what he says.” If this is the case, we are in big trouble. But because most of Trump’s cabinet nominees are making claims directly contradicting the President-elect’s positions on a host of issues, no one really knows what’s coming.

I could imagine an argument that the United States has been too predictable, which has limited our negotiating leverage and that a dose of unpredictability would make our friends and adversaries alike more likely to compromise. Even if that’s true, introducing so much uncertainty from the country that has essentially guaranteed a big chunk of global peace, security, and prosperity over the past seventy years would come at a huge cost.

More likely, the antagonism toward our friends, embrace of our allies, and general environment of uncertainty will force America’s allies and partners around the world to hedge their bets. Some, like Japan and possibly Europe, might have the capacity to invest in their own defense capabilities to counter regional bullies China and Russia. Most everyone else will be forced to be more accommodative of China and Russia’s demands if they lost their confidence that America’s has their backs. A wise America is a strong America, a blustery America might be kicking up a lot of dirt but it will ultimately be weaker.

Some people I respect are saying not to worry, but this is hard to do. I am a Democrat who has served in the US National Security Council, State Department, and Senate Foreign Relations Committee. I have many close friends who are Republican who’ve been involved with foreign policy and national security for years. We’ve worked closely together and share many perspectives about what it takes to promote America’s interests and help maintain peace and security globally. Most of these people signed on to never Trump petitions and are now sidelined. From a national security perspective, this transition doesn’t seem like it’s from Democrats to Republicans but rather from the D/R “establishment” to some type of unknown new thing. Very many of the people going into the Trump administration on national security are relative unknowns with very little relevant experience. Most of the slots are as still unfilled and so the Obama people leaving tomorrow have no one to brief on the Trump side. This is by far the most dangerous transition in modern American history, and the Trump national security team is by far the least experienced in modern American history.

Even before this election, I was sensing the end of the post-war period, the advent of what I called a “post-American world.” Planners during and after WWII had come to feel that the absolute sovereignties and nationalisms that fueled the two world wars needed to be tamed a in a system of overlapping sovereignties, which led to the creation of the UN, the Bretton Woods institutions, NATO, the EU, etc. During the Cold War and beyond, these structures were fragile and needed a backstop with a big stick. That was, and is, the United States. The rebalancing of global power after the anomaly of America’s post-War dominance and the rise of China as a peer competitor with a different world view were already changing that. But by essentially declaring that the United States would henceforth behave like a normal country fighting for its narrow interests, Trump seems to stepping Away from America’s historic role.

Big changes to the international system often arrive in conjunction with conflict. The peace of Westphalia followed the Thirty Years War, the Congress of Vienna followed the Napoleonic wars, and the establishment of the UN followed WWII. If we are ending the post-war order and returning to the pre-war model of absolute sovereignties, spheres of influence, and balance of power, it is likely we will see heightened levels of conflict around the world as a new equilibrium is created. As Antonio Gramsci once said, “the old world is dying, the new world has not yet emerged, and in the twilight rise up monsters.”

I still believe in America and our ability to course correct over time, but one day before the inauguration, I feel the monsters rising. I truly hope I am being histrionic. I fear I am not.