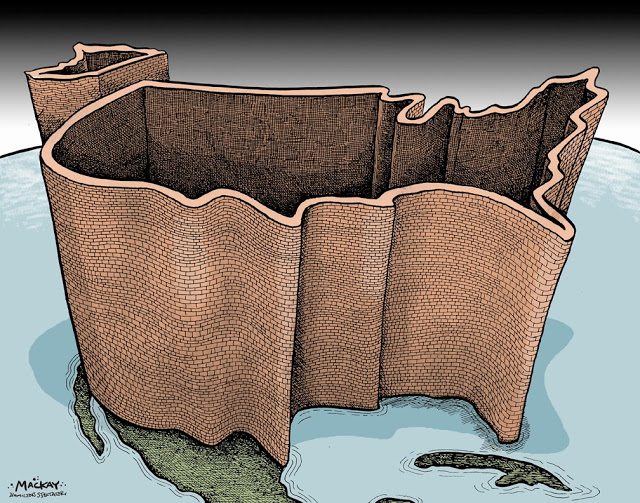 The United States is facing perhaps the most dangerous moment since the 1941 Pearl Harbor attack or the 1962 Cuban Missile Crisis. This danger does not stem from terrorism, immigration, or Islamic extremism but instead from the rapid deterioration of the post-World War Two international order. The Trump administration did not create this crisis but is contributing to it massively. Unless this changes, the ensuing conflict will likely destabilize the world and undermine America’s security.

The international order today under threat embodies lessons learned over centuries of European and American history. The 1648 Peace of Westphalia ending the Thirty Years War established modern concepts of inviolable state sovereignty and gave national states authority over religion, which had previously been a transnational force under the Holy Roman Empire. After the state system broke down under the stress of the Napoleonic wars in the late eighteenth and early nineteenth centuries, the 1815 Congress of Vienna reestablished a balance of power between sovereign European states that largely held for a century. But after this system of rigid state sovereignties led to the First World War and its excessive nationalisms fueled the catastrophe of WWII, post-War planners realized the new world needed to be placed on a more stable and peace-inducing foundation.

Because this incredible group of people believed overly rigid concepts of sovereignty and unchecked nationalism had led to the world wars, they imagined and built a world based on concepts of collective action, shared sovereignty, and transnationalism. Most of the global institutions tasked with supporting this new model—the UN, World Bank, IMF, European Union, and NATO to name a few—and even the very concept of enforceable international law stems from this central insight.

But even as the largely Western post-War planners were forging this new world, others elsewhere were drawing very different lessons from history. For colonized people around the world just emerging from colonial domination, sovereignty and nationalism were not the core problem needing to be addressed but instead the foundation upon which new identities and new states needed to be built. That’s why shared sovereignty worked for Europe but never really took hold in Asia, Africa, or Latin America. Nevertheless, the idea of a world bound together by global norms spread primarily because it was guaranteed by American political, economic, and military power and by a shared sense of global interconnectivity and responsibility among US leaders in collaboration with partners around the world. These ingredients helped create the greatest period of growth, innovation, peace, security and stability in human history.

As the Cold War heated up, millions of people in the Soviet bloc were denied access to this increasingly globalized world but their longing for it helped bring down the Soviet Union. And as prosperity grew in Europe and Asia, not least because of American economic policies and market access, the overall structure held because the economically successful countries in those parts of the world were all US partners protected under the American security umbrella. But as China under Deng Xiaoping emerged from its economic and geopolitical isolation and began its spectacular growth and as Russia emerged from Soviet collapse with nuclear weapons, petrodollars, and aggressive authoritarian leadership, the post-War system faced new levels of threat.

China’s continued economic growth after 1978 led its need for imported natural resources to eventually outpace its ability to protect the acquisition of those resources. A confident, expanding China also recognized that reasserting its traditional middle kingdom role was impeded by America’s power and alliances across Asia. After the first Gulf War demonstrated US military dominance and US aircraft carriers forced China to back down in its 1994 confrontation with Taiwan, Beijing began its massive military buildup that continues today. Particularly since the 2008 financial crisis convinced Chinese leaders that America was in terminal decline, China has sought to assert dominance over US partners in Asia through highly aggressive action in the South and East China Seas and elsewhere. In doing so, Beijing has chafed at the constraints placed on it by post-War international law and institutions, preferring instead to often undermine those norms and multilateral institutions and deal on-on-one with weaker countries to enhance national power.

Post-Cold War Russia followed a similar trajectory. As stronger integration with European Union and NATO helped former Russian satellite states develop the courage to defy Moscow in previously unthinkable ways, Russia under Vladimir Putin has increasingly sought a return to the nation state system that favored larger, more powerful countries at the expense of their smaller and weaker neighbors. Moscow’s effort to exert its influence in the region positioned the country once again, like the USSR, in opposition to the broader post-War international system.

Even before Donald Trump was elected president, this system was under tremendous strain. Growing debt made it ever harder for the US to support its international obligations, American politics were becoming increasingly politicized, making foreign policy continuity more difficult, and both allies and adversaries were gaming the system, often at America’s expense. George W. Bush’s disastrous response to the 9-11 attacks and botched invasions of Iraq and Afghanistan weakened America’s alliances, undermined US global authority, and exhausted the American people. Although Barack Obama stabilized the economy and consolidated American’s global relationships and power, his failure to enforce stated and implied red lines in Syria, Ukraine, and the South China Sea all fed a global perception that American was unable or unwilling to play its traditional role underpinning the global system.

Under almost any plausible scenario, the United States would not have been able to maintain its centrality in the international order. At the end of WWII, America’s unrivalled economic position stemmed from the fact that all other major economies had been virtually destroyed. It was the stated policy of the US to foster the economic growth of its allies. But as those countries grew economically, it was all too easy to receive the global goods of security and market access provided by the US without pulling their weight in support of the international system itself. While some allies like Japan made significant financial contributions to its joint defense with the US military, for example, the 27 non-US NATO allies’ pay only 27% of the NATO budget, with the US providing the rest.

As a candidate, Donald Trump was not wrong to suggest, as Barack Obama had before him, that NATO and other allies needed to contribute more to the common defense. He was also not wrong that America needed to be far tougher in its negotiations with China. The colossal mistake of the Trump campaign and now administration was and is its misdiagnosis of the core international problem ailing America.

Many critics of President Trump point to his eccentric personality as they key driver of America’s chaotic foreign policy. This is a mistake. When viewed from a historic perspective, a far more coherent—and frightening—perspective emerges. What the Trump administration is seeking is, quite simply, a renationalization of the global world order. In attacking the institutions of this order, expressing support for nationalist strongmen around the world, supporting the forces of dissolution in the UK and Europe, picking fights with traditional allies dependent upon America for their security, seeking to cut funding for the UN, other international institutions, US diplomacy and foreign aid, and undermining international rule of law and human rights standards, and throwing a spanner into collective efforts to fight climate change and other transnational challenges, the Trump administration is at war with the very system America’s greatest generation created and ensuing generations have worked tirelessly to protect and promote.

By fostering global renationalization, the administration is catalyzing the return to a world of states in a balance of power system with the US as the strongest single player. Administration officials are correct that this will strengthen America’s negotiating leverage but massively discount the cost. The world as we know it, with its globalized economies, open communications, freedom of travel and navigation, etc., exists within a US-led ecosystem. If America, still the most globally responsible country in the world, plays half its traditional role it will still be the most globally responsible country but the world will collapse. Other powers might eventually step up to fill this void but the danger would be what happens in the transition. As the Italian communist Antonio Gramsci once said, “The old world is dying, the new world has not yet emerged, and in the twilight rise up monsters.”

Among the monsters today rising are the fear among America’s allies that America no longer believes in the values it has so effectively spread around the world and that they can no longer rely on American security guarantees. This faces smaller countries in Asia, Europe, and elsewhere with a difficult choice between on the one had building up indigenous defense capabilities able to counter China and Russia or on the other becoming far more susceptible to Chinese and Russia bullying. That is why Australia, for example, is mired in a national debate on whether to reorient its foreign policy closer to China and why the Germans and South Koreans are having previously unthinkable conversations about developing nuclear weapons. Rather than seeking to repair the sagging international system through American leadership, however, the Trump administration is throwing America’s allies to the wolves. Rather than developing a strategic response to a fast-changing world or reinforcing America’s best values, the administration is rejecting standards at home and undermining its natural allies abroad.

American strength has never been based on hard military power alone. America’s soft power, its ability to build coalitions of like -minded countries around shared value and goals has been the true hallmark of American strength for nearly a century. America’s immigration system, among the most open in the world, has been an economic and international relations miracle. Its open markets and investment in future technology has also made the US the most advanced global economy but also facilitated the rise of trading partners. Its diversity has opened up a new set of cultural possibilities that have launched new art forms and industries and made American and all Americans richer. Perceiving its strengths as its weaknesses would force the United States to undermine its own strength rather than address its weakness. That is the path America is currently on.

Continuing to undermine rather than fix the international system upon which American and global prosperity has been based will destroy the post-War international order and mortally wound the United States. The systemic shifts that happened in 1648, 1815, and 1945 all came in conjunction with wars that redistributed global power. We already know from history where the balance of power global system ultimately leads. Returning to it is a gamble of terrifying proportions that likely cannot be achieved without a violent reset of the global power equilibrium. This violence will likely not mean a world war. Instead, it will probably look something like 1956.

In the beginning of that year, the UK was still a global power. By the end of 1956, it still had the same number of ships and troops and an economy of the same strength but was a regional power. In the middle, the Suez crisis had demonstrated to the world that the UK did not have the wherewithal to support its commitments. Similar traps await the United States, particularly being set by China.

It is not too late for the Trump administration to reorient itself, but that date is fast approaching. America has been the primary beneficiary of the post-War order it created with its allies. It destroys it at its own, and the world’s, peril.