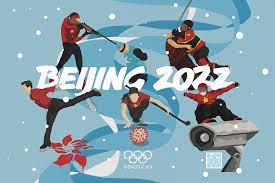 Like many sports fans around the world, I love the Olympics for what they represent: an opportunity for incredible athletes from 200-plus countries and territories to come together in a…