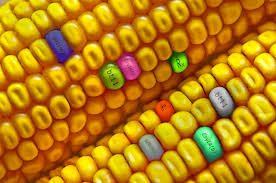 The Case Against “Nature” (and for regulated GMOs) https://jamiemetzl.com/wp-content/uploads/2014/09/GMO-Corn.jpg 276 183 Jamie Metzl Jamie Metzl //jamiemetzl.com/wp-content/uploads/2017/02/logo-trans-rev-685px.png September 11, 2014 March 2, 2017
I love nature as much as the next guy.      I would swap in a moment the beautiful view of the Chrysler building from my New York City office for the span of the Rockies from the top of Colorado’s Independence Pass. I’d happily trade the Disney-like perfection of an American red delicious apple for a misshapen but stronger-tasting French pear.      But would I rather gather food in the forest than have it planted in farms and delivered to the grocery store? Would I rather fight cancer with meditation and prayer than chemotherapy? Would I condemn my friend’s Chihuahua as a genetically manipulated monstrosity of a wolf?      The truth of the matter is that much of what we call “natural” is the product of our own manipulation over time, and that nature, on its own, doesn’t seem to give a rat’s tail (or other part pf the rat’s anatomy) about us. I wish it did. read more
Latest Posts
All tags
atlantic council beijing china cnn coronavirus covid COVID-19 covid19 CRISPR Daszak dna donald trump genesis code genetic engineering genetic enhancement genetics GMO hacking darwin human rights IVF jamie metzl japan kim jong un korea metzl north korea obama pandemic PGD russia science sex singularity TechCrunch technology tedros Tibet transhumanism trump united nations WHO world health organization Wuhan WWII xi jinping
Login to Jamie Metzl
Reset Password
Enter the username or e-mail you used in your profile. A password reset link will be sent to you by email.